Thanks @SunshineCTF for holding a CTF.

It's a 32-bit binary with PIE enabled, SSP and RELRO disabled.

The program gives us the address for welcome function which is called by main. So, we can calculate the process base. In the function we can send as many bytes as we want through scanf. It's a simple buffer overflow. Also, there's a function named mania, which shows us the contents of flag.txt.

What we have to do is a simple overflow to return to mania.

It's a 64-bit binary with RELRO, SSP, PIE enabled.

As I analysed the binary with IDA, I found that the program receives a command and an argument. There are some commands available.

The contents of the flag is a dummy and it says the real flag is written in flag.txt. I tried tombstone flag.txt but only could see the first part of the flag. This is because the flag contains a whitespace and fscanf only reads until it comes.

It seems last_ride is tempting but it interprets the argument as a pointer (to a string pointer). However, we can store arbitrary data into heap by oldschool and get the pointer. So, what we have to do is oldschool A/bin/sh and oldschool &(/bin/sh). Just make sure not to send y or n when we are asked to run the shellcode. y executes the shellcode and the program exits because of the segmentation fault, and n unmaps the shellcode and the data will be lost. Also, make sure to put a byte before /bin/sh in order not to make the least byte of the address zero. This is because scanf doesn't read NULL and also we have to make the highest byte of the argument for oldschool zero.

It's an ascii text.

When I tried solving this challenge, @theoldmoon0602 had already found out this is an RLE for Game Of Life. I imported the RLE in this site but I just got an ascii table. (This site)http://www.conwaylife.com/wiki/Run_Length_Encoded explains well about the RLE format. It says:

Anything after the final ! is ignored.

I opened the pcap file and saw the protocol hierarchy. It seems there are HTTP, DNS, and ICMP packets mainly. 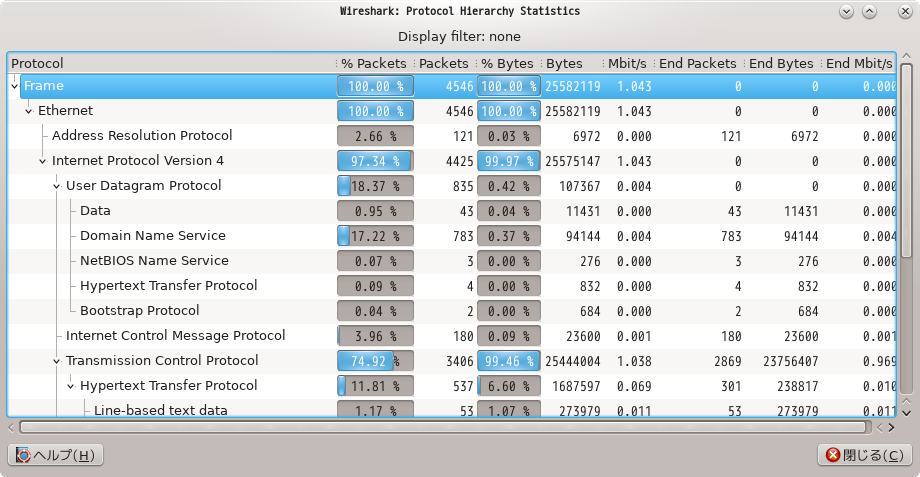 As I looked over the ICMP packets, I found the data were strange. The packet length of ICMP packets are different from those of each other. I guessed the length is the ascii code for the flag. I gathered the packet size and wrote a script to restore the flag.

The image is obviously a tree for Huffman code. However there is no encoded bytes.

As I opened the image in stegsolve, I found the LSB has the bytes. I wrote a script to decode the bytes.

I had no idea what the file is.

I googled the first line and found this map.

OK, it's middle ocean and the latitude and the longitude are the ascii codes.

The file contains some character such as +, [, >, which are used in the brackfuck language. I posted the file to an online interpreter and found the flag.

There are many A, R, B in the ciphertext.

Maybe it's xored with ARB or something like that.

After a few attempts, I found the key was arb.

But the output is still encoded in some ways.

I tried some substitution ciphers and found it was encrypted with the Vigenere cipher. This site solved it.

A team member @st98 had already solved Enter The Polygon 1 and he wrote a useful script to generate an image to run a code.

Also, he found there was a JWT session like this:

This is used in /admin page. He also uncovered that it accesses to the sig url if sig contains a word nginx.

So, I began with such a plentiful clues. I guessed that it downloads sig url and uses it as a key for the JWT signature. I uploaded a key to my server and signed my session with the key. Also, I changed the role to admin.

I accessed to /admin with the session set and found the flag.