I played angstromCTF 2019 Quals as a member of team zer0pts. It had been held for 1 week beggining on April 19th. We got 3730pts and reached the 8th place. I was mostly working on pwn challs but also solved another categories and got 1300pts.

Most of the challs are well designed, the source code for Web and Pwn challs are open, and there are a wide range of challenges from easy to hard. I really enjoyed the CTF. Thank you @angstromctf for holding such an amazing CTF!

The bad point is that the server was instable and we couldn't often access to the scoreboard. I hope the infrastructure will be improved next time :)

It's a 64-bit binary with SSP, RELRO, PIE disabled.

And there is a simple stack overflow vulnerability in the main function.

Also, there is a function named flag, which prints the flag if the following constraints holds:

So, we just have to make a ROP chain to accomplish them.

It's a 64-bit binary with RELRO, PIE disabled.

We can send the name of the item and the program writes our input 3 times.

There is the FSB vulnerability. Also, it has a function named flag, which prints the flag.

So, we just have to change the GOT address of puts to the address of flag. Just be careful to put the address at the last of our payload because it's 64 bit.

It's a 64-bit binary with RELRO, PIE disabled.

We can send the name of the item and the program writes our input 3 times.

This is the exploit code:

It's just a simple buffer overflow. We are given a function which prints the flag.

It's very small web server which seems to be written by the assembly language. It waits for a connection and forks the program when someone accesses. The program has a buffer overflow vulnerability when reading the URL because it reads character by character until a whitespace comes.

Also, there is a strange system call right before the program exits.

If it writes all of the characters on sys_write, rax will be 3 and sys_close(0) will be called.

So, our first goal is to control the value of rax and call an arbitrary syscall.

sys_write returns 0xfffffffffffffff7 if the parameter count is too large to write. We can control the value of count because it's located near the overflowed buffer. So, the following formula holds.

So, I set up a server and listened to a connection:

Thus, we can get the output by sending it to the server like this:

Be careful not to use a whitespace in the payload.

This is my final exploit code:

It's a simple brainf**k interpreter with the user input not implemented. Also, there is a function named flag, which prints the flag. The memory for the interpreter is a local variable of 256 bytes long. We can send a brainf**k code of maximum 144 bytes long.

As it doesn't check the reference range, we can read from and write to arbitrary memory addresses. We have to make the exploit code small because the size for the code is limited.

Our goal is to overwrite the return address of main into the address of flag. I made the following script to generate such a code.

The exploit code is the following (138 bytes):

The MAC value is generated by the following script:

The IV is randomly generated each time we connect.

be the number of the message blocks and

be the message block. A block

, which is the byte expression of

, is inserted to the blocks. Then it calculates the token

blocks and append it to the end of the original message.

This means the final output will be

because the following blocks are same as the previous blocks. One problem is that the block

also changes as we extend the message blocks. However, we can control it because we can specify the IV.

This is the final script.

When I tried this chall, @st98 had already found that the printer packets are of the XQX format. I cloned this repository and built the software, and ran the following command to restore the document. (out.bin is the extracted data stream of the printer packets.)

It will dump a file named hoge-01-4.pbm and the contents can be seen by GIMP.

We are given a PDF file which is truncated.

I tried several tools such as gs or mutool to repair it, but none of them worked. OK, so let's read the PDF binary. In the beggining has the following stream object and the stream lasts until the end of the file.

The header says that the stream is compressed by deflate. This article (Japanese) really helped me understand the structure of the PDF format. We can decompress the FlateDecode stream by skipping the first 2 bytes according to this another article. Let's see if we can decompress the stream.

This won't work because the stream is truncated.

I assumed that the last part of the stream was not necessary and tried to find the correct length.

The another part we have to do is append some objects to make it a valid PDF document. The 4th object (the first part) becomes like this:

We need a catalog, which is referenced by the PDF viewer first.

And the page tree, which has an information about how many pages the document has, or the reference to the pages.

At last, we have to append the trailer in order to make the viewer recognize which object appears at which offset. Making all togather, I wrote the following script which dumps a repaired PDF. 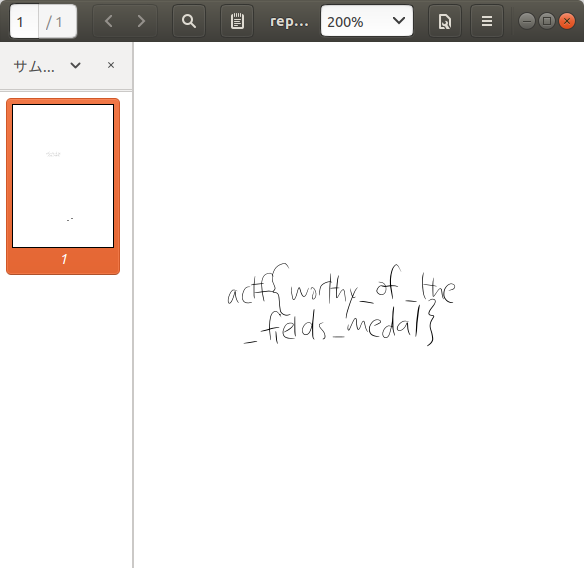