FireShell CTF had been held from March 22th JST for 24 hours. I played this CTF in zer0pts and we reached 3rd place. I solved only two pwn tasks and one easy crypto/rev, but the pwn tasks are tough and I'm going to write the solutions for them. The tasks and solvers are available here:

Thank you @FireShellST for hosting the CTF.

It's a simple HTTP server but it doesn't fork. Analysing the binary, I found the vulnerability in serve_file function. 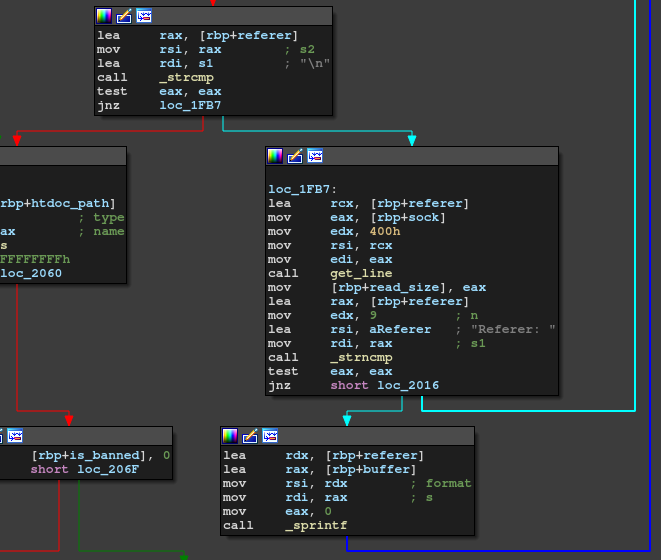 You see a simple Format String Bug in the referrer URL. Although it doesn't fork, the server accepts the request in an infinite loop and the base address won't change in every connection. So, my idea is to leak addressed in the first connection and get the shell in the second connection.

Since RELRO is enabled, I tried to get the shell by overwriting the return address of serve_file. However it didn't work because buffer size is not enough and sprintf overwrites *environ and the shell couldn't spawn.

My solution was to overwrite the return address by Stack Overflow caused by sprintf. First, we fill the buffer by something like %1023c until right before the stack canary. We can write null by %8$c or whatever, and can directly put the canary. In the same principle, we can inject our rop chain just by changing \x00 to %8$c.

Here is my final exploit:

I sent the result to my server but duplicating fd and spawning shell will work as well.

After I solved this challenge, I found this.

And it turned into a simple easy FSB to change the filepath we open. Why would they need to open this hint?

As I'm new to browser exploitation and I've never used webkit, it was a really hard and interesting challenge.

We're given a webkit engine and its patch.

For someone like me, who is a beginner in js pwn, it doesn't seem exploitable.

Googling the patch, I found this article. it's a vulnerability of the side-effect in JIT compiler and is very similar to this challenge.

This is a simple PoC to crash the engine.

The problem happens in toString. Before it tries to compare c == 1, the type of the array a is ArrayWithDouble but during the comparision it turns into ArrayWithContiguous as the first element is set to {}. However, because the type isn't checked in JIT, a is considered to be ArrayWithDouble even after c == 1. So, the value writting in a[2] is regarded as a pointer and thus "" + arr[2]; will crash the engine.

According to this video and this article, we need to make addrof/fakeobj primitives first before AAR/AAW. Fakeobj is "Making an object which is located in an arbitrary address." You'll immediately notice we can create a fake object by returning arr[2] in the above example. Also, we can leak the address of an object by putting the object in a[0] and returning a[0] after c == 1 because the pointer is considered to be a double value in the go function.

Here is my addrof/fakeobj primitive.

My first idea was to make a fake object in properties of an object, whose structure id is same as that of a Float64Array. In this way, we can forge the fake object to be a float array and we can get AAR/AAW by overwriting vector of Float64Array. However, it didn't work and I gave up.

I tried to use butterfly of ArrayWithDouble instead of Float64Array but it didn't work by the same reason.

I found describe was enabled in the server as well, and used it to leak the structure id :p

As I didn't know the keyword "gigacage", I thought that it was because of the webkit version. I googled for a newly release webkit exploit to learn how to get aar/aaw "nowadays" and found this exploit.

In this exploit it overwrites the butterfly of the victim object to read from and write to an arbitrary address. By setting the butterfly to the address + 0x10, we can read/write data by its property regardless the length.

In order to overwrite the butterfly, it uses the array of the fake object. Since it refers data by offset from the butterfly, we can bypass gigacage :)

The principle of executing the shellcode is same as that of my first browser exploit. I used wasm object rather than JIT function because I couldn't find a pointer to the JITted function. (Both are rwx!)

I found the pointer to the wasm code is stored in *(*(addrof(wasm_instance.exports.main) + 0x38)). I wrote a shellcode to read /flag and writes the contents to stdout and exits.

However, it didn't work because the parent process waits for wasm code to return and hungs, which causes timeout in the remote server. I changed the code to properly return from the shellcode to the wasm trampoline.

And this is my final exploit: 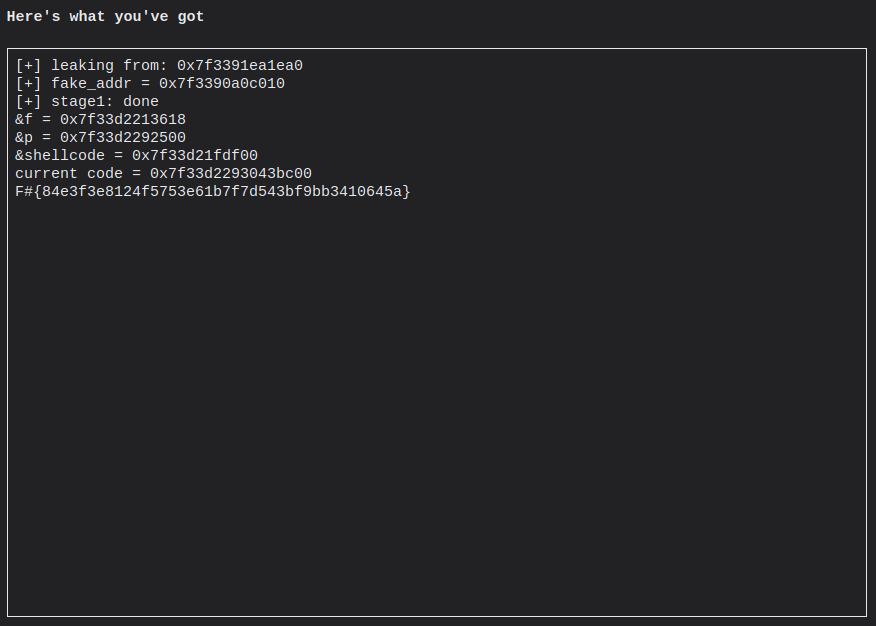