The overall difficulty was hard but many challenges I solved were fun as well. I mainly worked on pwn and kernel tasks.

Here is my solvers for some tasks:

The program asks for a name of an item and price of four items.

As you can understand from the output above, our goal is to call the function located at 0x8048878.

Let's first check the function in which it asks for the name of the item.

It accepts 0x15 bytes by fgets, where var_110 is the variable of Item structure. Item structure looks like the following. (I didn't analyze the structure completely but this is enough.)

I'm not familiar with data structure but the items are stored in AVL tree according to a team member @keymoon. This program uses the price of the items to "balance" the tree. In the beginning of the program, it inserts 6 items with price set to 10, 20, 30, 40, 50, 25 respectively in this order. The item with price 25 is the victim whose function pointer can be overwritten. The tree looks like this after the 6 insertion. 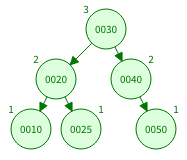 We can insert four items with arbitrary price after that. So, our goal is to make the node with price 25 be the top of the tree because the function pointer of the top node will be called. [@keymoon] immediately calculated it and found out inserting 24, 26, 27, 5 would achieve this. In fact, the tree after these insertion will be like this: 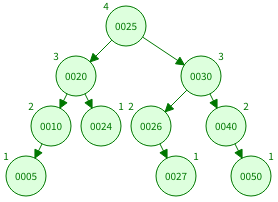 Now, it's clear. We just have to overwrite the function pointer and insert the 4 items.

This is a JS pwn challenge. We're given the modified version of MuJS source code.

There're some changes on the source code:

Unlike normal JS pwn tasks, the goal of this challenge is not to get the shell but to make stable AAR/AAW/ACE primitives.

The vulnerability lies in the first change. Let's find out how to abuse it.

I focused on the following lines:

Since the type of n is uint16_t, it may cause integer overflow. Assume current n is very large like 0xffff, then n += seplen will cause overflow and very small value will be passed to js_realloc. If the length of sep or r is pretty large compared to the overflowed n, the next strcat will cause heap overflow!

This challenge doesn't provide the binary unlike normal pwn tasks. Also, our exploit need to be working on 5 binaries that are running on x86-64 or AARCH64 and are compiled with various compile options. So, this challenge required not only the skill to write exploit but also the skill to make the exploit reliable.

Fortunately, the self-made memory allocator fills the gap between the different architectures. We don't need to care about the malloc hell. (This is pretty natural for JS pwn like v8 or jsc!)

Before abusing the vulnerability, we need to know how the memory allocator of this engine works. The allocator is very similar to SLAB of the linux kernel.

It has linked lists for some size from 0x10 to 0x800. (Above 0x800 will be allocated by malloc.) The allocator returns a chunk that is appropriate for the requested size. Each freed chunk has next pointer in the beginning like SLAB and there's no header like ptmalloc.

The chunk list of each size is named "zone" in the source code. 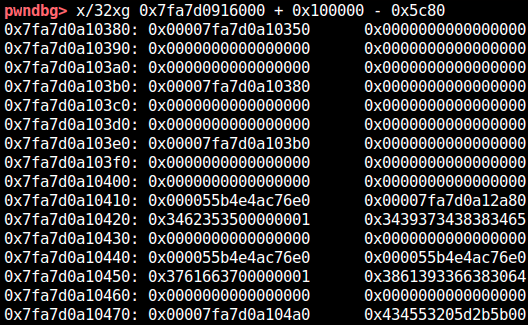 In the figure above, you can see that the first 3 chunks are freed and linked. The chunks higher than 0x7fa7d0a10410 are in use in the figure.

We can use this allocator for writing a stable exploit as the structure is common for every architecture.

Thanks to another MuJS challenge from 0CTF/TCTF 2020, I knew about the JSObject of MuJS to some extent. It's defined in jsvalue.h.

What's unique to MuJS is that even the element of an array is described as property of the object. This means there's no actual array on the memory unlike V8, JSC and so on. When it evaluates something like arr[0], it actually referes arr.0!! This weird spec makes it hard to abuse type confusion in MuJS.

New object named DataView is added in this challenge. We can use it like in this way:

It's similar to ArrayBuffer. The buffer for DataView is also allocated by the new SLAB-like allocator. Each DataView object has the size and the pointer to the buffer.

This is very useful because there's no object that can be "dynamically" modified in normal MuJS. So, we can get AAR/AAW primitives by somehow overwriting the dataview.data.

First of all, we need to corrupt the linked list of a zone. I used off-by-null of strcat to set the most least byte of the freed list. The list goes from higher address to lower address in default like this:

In order to abuse off-by-null, we have change the order to something like this because the next chunk of top must be freed:

I wrote a function to "Heap Feng Shui."

We have to fill the freed chunk holes before calling it. 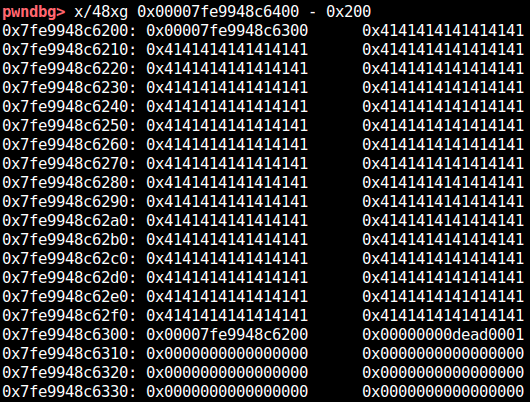 You can see that there's an infinite link in the two freed chunks due to off-by-null. After that, I created a DataView buffer that overlaps with a DataView object.

Now, the buffer of evil points to the object of DataView.

AAR/AAW is done. We can just manipulate the evil and victim objects.

What about Code Execution primitive?

Unlike famous JS engines, MuJS doesn't support JIT compiler/WebAssembly and we can't simply abuse rwx region. Also, we can't use the function pointers in the binary as we don't have the binary working on remote.

I thought there must be some function pointers for builtin functions such as gc or print and I looked for them using gdb. 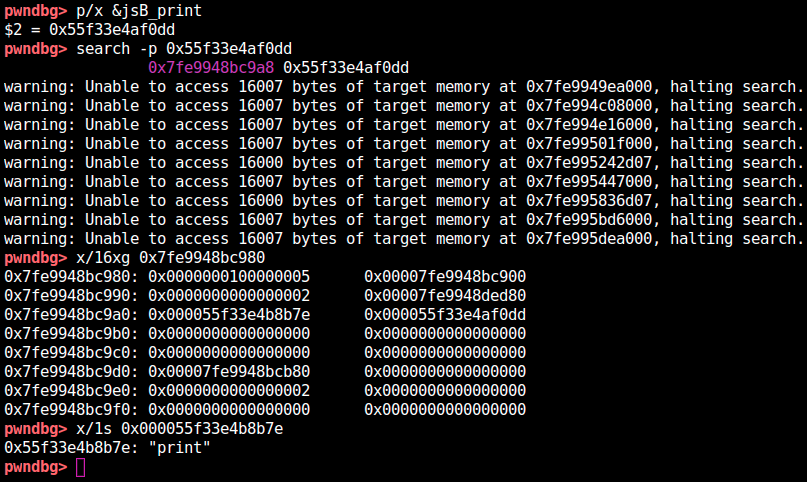 Yes, there it is!

In order to make my exploit reliable, I wrote a script that explores this builtin object by checking if

Be noticed that we have the base address of zone 0x80 as we can read the dataview.data of DataView(0x80).

Now, we can simply overwrite the function pointer with AAW to get ACE!

This exploit works with very high probability on all of the 5 remote binaries. It was hard and time-consuming but also a really fun challenge.

I solved this challenge with an unintended solution so I'm not going to write the detail for this one. We're given a pcap file named challenge.pcap which contains lots of plain TCP packets. In each connection the client sends a json object like this:

The decoded result was a JPEG file. However, most of the data except for the beginning are not JPEG. Then I realized that the client sends several splitted JPEG files in pararell.

I was looking for a way to re-construct the JPEG files by cheking if a merged JPEG file is "properly" corrupted but eventually gave up. While trying many techniques, I found one of the image (images are corrupted but can be seen with very low-quality) looked like text while others looked landscape or some pictures. So, I picked up that one and merged with the other 300 base64 data and decoded into JPEG file.

Then, I could see the beginning of the text in some of the decoded images. In this way, I picked up the most ”plausible” one among about 300 images one by one and finally re-constructed the original image.

We're given a tiny assembly code.

As I analyzed the code, I found some instructions in the code are actually not necessary. I re-wrote the code with comment.

The first half part of the program is just a length check, which ensures the length of argv[1] is greater than 26. There is a strange code after lenOK label.

This line stores the address of main+16 to ebx. ebx is later used in the check loop.

That's why there are many unnecessary instructions in the code. It uses parts of the machine code as seed of CRC32. The overview of this loop looks like this:

result corresponds to rdi in the original code. At first glance it seems rdi is not used anywhere. However, the or instruction changes the flag register and it affects ah register due to the lahf instruction. So, we have to keep rdi 0 for every iteration.

Our goal is to find CRC32 quine. @theoremoon wrote the following C code to find the CRC32 values.

Be noticed that the implementation of CRC32 in Intel CPU is different from that of python.

We can access to the server with the given VNC credential. 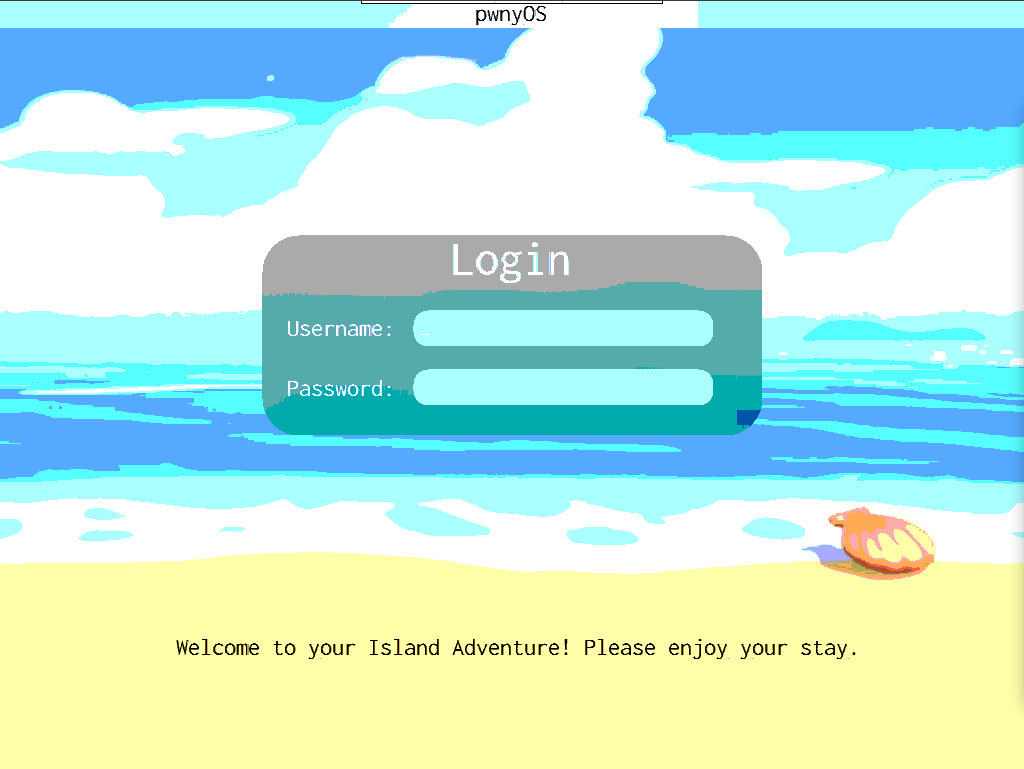 I was surprised that they wrote this OS for this CTF :o

Anyway we need to find the password of user sandb0x. The challenge description says the first character of the password is "p" and it consists of 4 characters.

When you enter "a" for the password, the login screen immediately shows "Incorrect Password!" message. However, when you type "p," it takes about 0.5 sec until it shows the message. So, it's obvious that time-based leak is required.

When I solved this challenge, however, I didn't write the script to find the password. I accidentally found "w" was the second character and guessed the password "pwny" and it was accepted. Unintended solution...?

I needed a way to automatically send my payload through VNC. I used xdotool to emulate key events.

I sent this script to ModMail and got the flag.

When I was playing with some system calls, I found ecx register was different before and after calling the system call. As the value of ecx (=0x400000) was 4MB aligned, I thought it might be the base address.

This dropped the flag :)

By the way, link-time kASLR is not kASLR, right...?

My "intuition" told me to call open system call twice and read them separately and I could leak the flag.

Only one trial lol

After solving "Freaky File Descriptors" I found I could leak its flag in the following way. 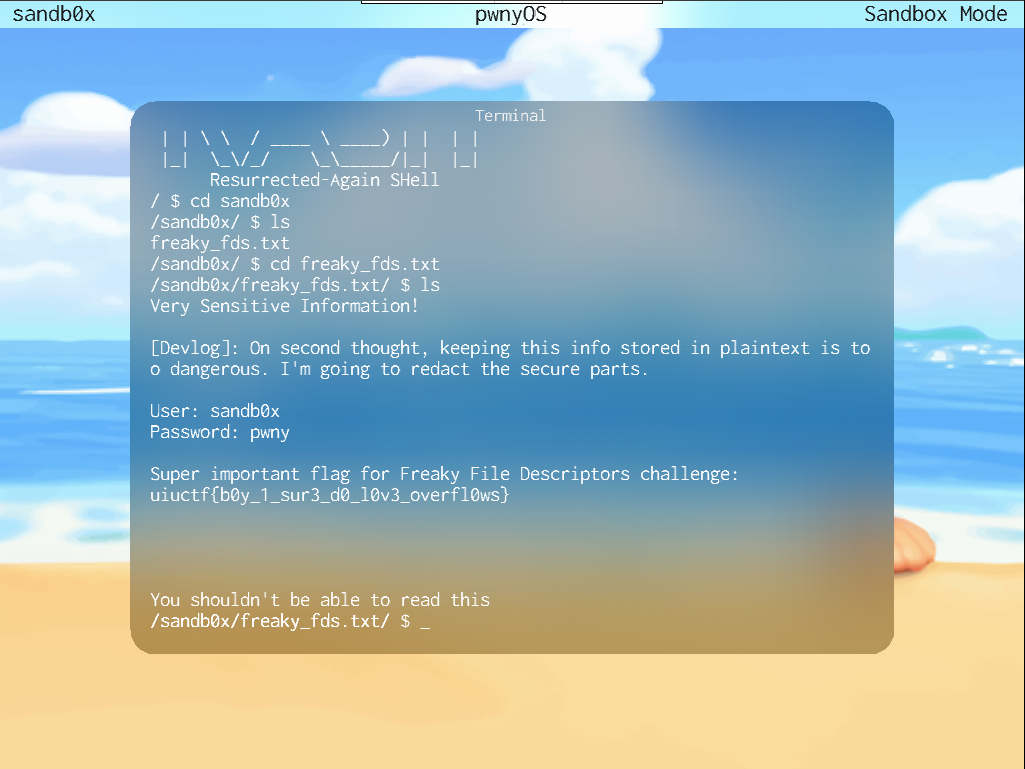 I reported this bug and got the Small Oops flag.