I played Pwn2Win CTF 2021 in uuunderflow and got the 2nd place. Unfortunately(?) we couldn't get the 1st place thanks to the flag hoarding but the CTF itself was a lot of fun!

I couldn't play it full time but worked on some pwn challenges and managed to solve "pe_analysis" and "Accessing the Truth". I'm going to write the detailed write-ups of them.

We're given a very large file, which contains the vulnerable executable, some DLLs, and the VM image. The server is running a flask-made application. We can upload a Windows executable and the server shows some information of the PE as the output.

Immediately after I started reversing the PE, I found the program readpe.exe is actually an open-sourced software.

I checked the Issue and PR but couldn't find any (disclosed) vulnerability. So, I suspected this would be a 0-day challenge.

In order to find the vulnerability, I decided to fuzz the binary rather than read the source code.

The challenge is working on a Windows machine but the software works both on Windows and Linux. I compiled the source code with afl-gcc and tried fuzzing by AFL. I used this executable as the initial corpus.

This is running on Linux but the target is Windows. Let's check what happens if I give the testcase to the target app.

It's obviously a vulnerability. Let's check the register values too.

I check some of the testcases but they seemed to be crashing at the same place. (Actually some of them were different but they didn't look explotable at the first glance.)

We want to know if this bug is really exploitable. There 3 points to check:

If we can control all of them, we get a stable AAW primitive.

The value of RDX seems coming from the binary. (72 74 in the figure below.)

Obviously only 16-bit are taken. So, the controllability of the destination address is partial. The exploitability depends on the value of the base address: RAX.

The base address points to somewhere on the stack.

The RCX (source register) is NULL in the testcase. So, it's skeptical if this bug is explotable. I'll explain about this later.

The number of this oob-write is actually not only once. Setting a breakpoint here and running from the beginning shows you that this bug may be caused multiple times.

So, if we can control "what to write," we can possibly run a ROP chain.

This bug is caused by the following code:

This is a code from libpe. The function pe_exports is responsible for gathering the exported functions.

What we need is control ordinal and entry_name_ofs in the following code.

ordinal is a 16-bit value indicating the index to the exported function. This value is fully controllable.

entry_name_ofs is a 64-bit integer but RVA is a 32-bit value. What we can fully control is the 32-bit value entry_name_rva. Can we control the return value of pe_rva2ofs in this case?

Let's check how the conversion works.

Given an RVA, it iterates over all the sections and finds the one such that the RVA points to inside the section. The physical offset is calculated by the following formula:

To summerize, we have an Out-of-Bounds write in the following code, which can be executed as many times as desired.

So, my idea is make ROP chain only with the gadgets in readpe.exe.

Anyways, let's make a PE file. We have to control the sections and the export table most importantly. I had zero knowledge on the PE file format and I did some research. The figure in this Japanese article was the most comprehensive and easy to understand.

The address of the export table is RVA. So, we need at least one section for converting the RVA to file offset. I put the export table at +400h in the file and also set its virtual address to 0x400 for simplicity.

We also want one more section for writing the ROP chain. Here is the formula again:

In order to make the result big, we want to make VirtualAddress small and PointerToRawData big. I set the virtual address to 0x10000 and the size to 0xffff0000 respectively. This covers the whole region of the lower 32-bit address of readpe.exe. For example, rva2ofs(0xdeadbeef + 0x20000) == 0x1deadbeef.

We don't need to care about the size and the pointer to raw data because this is just for RVA conversion.

The number of functions, the address of names, and the address of ordinals are important. I set the names to 0x500 and the ordinal to 0x800 as shown above. (Be noted that we have to use RVA for them too. I simply re-used section 1 for this purpose.)

This would cause (invalid) OOB write.

So, the question is "can we really read the flag only with the ROP gadgets in readpe.exe?"

I love ROP and it was not so hard for me but it's pretty difficult to explain. From conclusion, I used the following ROP gadgets.

Quite few, isn't it?

Windows x64 calling convention uses RCX, RDX, R8, and R9 registers for the arguments. As I want to run the following code, for example, I need to control at least RCX, RDX and R8.

Controlling RCX is quite straightforward:

We can change the value of RDX by the following gadgets. *1

In order to use them, we want to control RAX and R9. Controlling RAX is simple.

I used the following gadget to control R9.

RBP points to the stack at the beginning and thus we just have to put pop X; ret; gadget at RBP+0x400.

The final thing is the control of R8. Fortunately there's a straightforward gadget for this:

Now we aquired the ROP primitives to fully control RCX, RDX, and R8.

There are some gadgets for making AAW. I chose the following gadgets because it can set the next RBP value. Eco-friendly :)

We can write "secret\flag.txt" to anywhere writable.

After calling fopen from IAT, I realized a problem.

It corrupts R9 and I couldn't use gadgets that ends with call r9 anymore.

To resolve this I first wrote the address of pop X; ret; gadget by the AAW gadget. Next to restore R9 I used the same gadget we used at the beginning.

subprocess.run returns an empty string whenever the process crashes even if it outputs something. So, we have to call exit in order to avoid the crash after our ROP is done.

Putting all together, this is my final exploit:*3

I got the first blood! Yay!

We're given a Linux environment. It seems there's an UEFI things to be working on it.

Actually I've not checked this challenge before I was called by the member. Aventador extracted the UEFI files and epist found the vulnerable one.

This part is also done by the team members. Epist immediately found a buffer overflow in the password input form.

So, now it's my part. They had already found the vulnerability, how to run the UEFI app, and how to trigger the vuln. I modified their exploit (RIP control) to run arbitrary (null-free) shellcode.

I didn't (don't) have any knowledge about UEFI but I only knew it can handle FAT file system. My idea was to write a bootloader-land shellcode to read the flag from the file sytstem by calling some UEFI functions.

In order to call UEFI function, we need to traverse SystemTable, which is of EFI_SYSTEM_TABLE structure. This variable is passed to UefiMain as it's second argument.

Checking the entry point of the UEFI application, I noticed this variable is stored to a global variable. 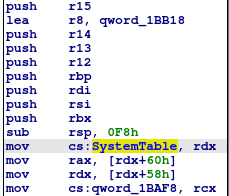 Of course there's no ASLR on UEFI and it's easy to traverse this table! For instance, the following shellcode gives BootService, which is helpful for opening a disk.

The goal is implement the following code in the shellcode.

At first I was stuck as I had no idea how to locate the address of this variable. However, this variable is actually just a GUID as the name suggests.

The GUID is also defined in SimpleFileSystem.h.

I did a search for this value on the memory and found that multiple UEFI applications uses it. I picked up one of them and successfully opened the volume.

Where is the Flag?

So, the things left are open, read the flag and print the contents.

However, we've been stuck for a while guessing the path of the flag. The flag exists at /flag.txt but is it accessible from UEFI?

We were a bit upset and did something teribbly wrong at first. The Linux filesystem is not FAT and obviously there's no reason we can access it from UEFI function (as far as I understand).

Then, what's in the volume? I wrote a bootloader-level shellcode that works like ls and found bzImage there.

At the same time, epist also found it by guessing some filenames! His idea was to read initramfs.cpio and locate the flag.

I immediately wrote the shellcode to load initramfs.cpio at the address 0x00000000 and locate the flag. After locating the flag, we can simply print it by the function provided by the vulnerable UEFI app. (Be noted the function interprets the input as UTF-16 string but the flag is just an ASCII string!)

Here is the final exploit:

*2:Actually we don't need to prepare "r" because it likely appears in the executable.

*3:As written in the comment, the value at "return address + 8" is used as ctx variable and we can't corrupt it until we finish writing the ROP chain!